Our first adventure for 2013 has now been completed! We went on a Wolf tracking day in the woods outside of Skinnskatteberg in Sweden, organised by Wild Sweden. It was an amazing day! We got to spend the whole day outdoors and learned a lot at the same time.

The day started at Pensionat Udden, a very charming guesthouse where we spent two nights. Marcus and Janne, our two guides, talked about wolves in general and specifically about the wolf territory that we were going to visit. After the presentation it was time to put on some warm clothes and get going. It was around 0 degrees C, not perfect for skiing, so the skis were left behind.

We found wolf tracks as soon as we got out of the car. We followed three sets of fresh wolf tracks crossing a lake and then continuing through the forest. It could have been three pups or maybe the adult pair with one of their pups. The tracks had probably been made during the night so we knew the wolves were in the area. Very exciting!

We had a bonus adventure when going to lunch, when our van got stuck in the snow. After some shoveling and pushing we had to give up... Marcus waited for the tow truck and we walked a couple of kilometers to where we were meeting the rest of the group for lunch. And actually during this unplanned walk we made some exciting discoveries! First we followed tracks from two wolves, probably made a couple of days ago. We could see that the wolves had urinated to mark their territory. And then suddently we found really fresh tracks from a single wolf. These tracks couldn't be more than a couple of hours old, maybe the wolf was standing somewhere nearby watching or smelling us...


Allan and Eva from Pensionat Udden had prepared a lovely fish soup for lunch, which we really needed after all the excitement. After lunch we continued to another lake in the same wolf territory. It was very peaceful to just watch the sky getting darker and darker while trying to spot something moving across the lake. Could we maybe catch a glimpse of a wolf? Marcus howled at the wolves, but we didn't get an answer. We made another stop on our way back to the guesthouse. Another howl from Marcus, and this time a wolf answered! We could here a faint howl from the nearby woods. Amazing!

After a nice dinner we went to bed feeling very happy about the day. We definitely need to do this again! Maybe come back for the wolf tours during the summer, when you can sleep in a tent in the wolf territory and the chance to hear the wolves are bigger.

So, what was the verdict from the teenagers? They really enjoyed the day, they liked the thrill of following the tracks and learning more about the wolves. So we must say that this was a good start for this family adventure year! 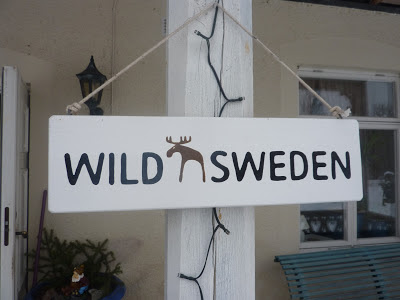