While half of Team Vildmark went west to Dublin, the other half went east to Moscow instead. When going to Moscow, doing all the preparations is almost an adventure in itself, as you can read in our previous blog post.

To maximize the adventure we of course had to choose the Russian airline, so we went with Aeroflot from Stockholm to Moscow. The sky was clear and we could see the ground all the way. We landed at Sheremetyevo airport and from there we took the aeroexpress train to a Moscow Metro station and then on to the hotel.

The Moscow metro was one of the best Metros we have ever used. Clean, inexpensive and very effective. We never had to wait more than a couple of minutes for a train. However, it is not that easy to find the right station to get off at since all the signs are in the cyrillic alphabet. Before we left home we printed the metro map in both English and Russian, so we had two versions which helped us find our way. 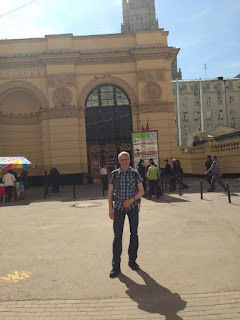 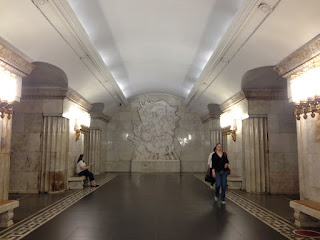 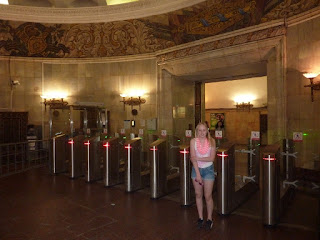 We had selected a perfect hotel, Mercure Arbat Moscow (thanks all you reviewers on TripAdvisor!). It was quite new with good, clean rooms, wifi and an excellent breakfast. But the best was definitely the location, close to the area Arbat and within walking distance from two different metro stations.

Moscow is a huge city, with lots of things to do and explore. We spent a lot of time just sitting at some café and watch people pass by. Very fascinating! We lived close to the pedestrian zone Arbat so we walked there for dinner each night. It was a bit of a challenge since no one spoke English, but at least most restaurant had English menus.


We didn't do much shopping. It is quite expensive in Moscow, and to be honest we didn't really find much we wanted to buy...

The first day was dedicated to the big Victory Parade, which is an annual tradition on May 9 to celebrate the victory over Nazi Germany in the 2nd World War. It was impossible for us "simple tourists" to get to the Red Square this day, but there were plenty of other places to stand and watch the parade. We waited together with loads of Russians to see all the military personnel and vehicles of all types.

If you want to get an idea of what the Victory Parade is all about, you can watch the "official video".

And this is what a Victory Parade looks like: 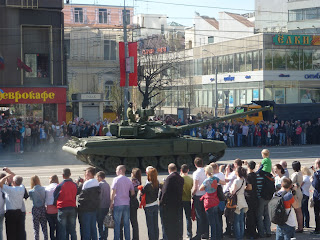 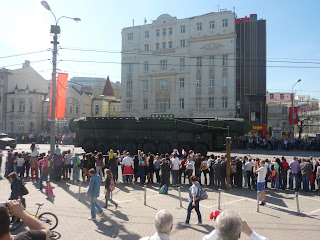 The parade was both impressive and scary at the same time... Apart from the Victory Parade - here are some other highlights from our adventure in Moscow.

Sparrow Hills (Vorobyovy Gory)
We took the metro to Sparrow Hills where you have an amazing view over Moscow and you can really see how enormous the city is. Here we logged our only geocache in Moscow, Pioneers Palace. 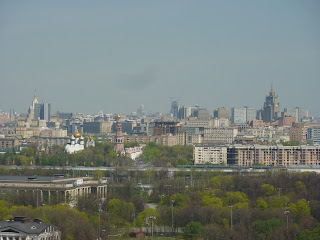 Kreml, the Red Square and GUM
Of course no visit to Moscow is complete without a visit to Kreml and the Red Square. We arrived early and there were still lot's of traces from the Victory Parade. There was a looooong queue to get into Kreml so we decided to skip that. Instead we went to explore GUM, the classic, big department store. Very expensive and we couldn't see many customers there. We didn't buy anything but relaxed with a cup of coffee.


Flea market
The only shopping we did was at a flea market where CJ bought a Russian airplane. Nice souvenir! 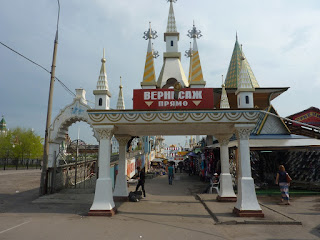 Great War Museum
Since the weather was really nice we decided to take a picnic and went to the Great War Museum which is located in the middle of a big park. The museum was not that impressive (even though CJ is quite interested in military history). It was quite difficult to understand anything when all the signs were in Russian... But we had a nice picnic in the park in the summer weather!


Kolomenskoje
The last day we made a trip to Kolomenskoje, which is a museum/park a short trip from Moscow. We took a long walk to try to find a geocache, which turned out to be missing. But it was worth the trip, the park was beautiful with all the fruit trees blooming.

To sum up, here are some words that we now associate with Moscow: Clean, Complicated (to get there...), Fascinating, Warm, Impressive and Expensive.
Upplagd av Team Vildmark kl. 19:40