On our way to Moscow and Dublin

OK, this might not be a "real" outdoor adventure... But we bought our teenagers tickets for a cityweekend as Christmas gifts. And since May is a busy month for this family, we decided that these city weekends would be part of our family adventure year. This also put some pressure on us to come up with ideas on what to do, and not just spend the whole weekend shopping and eating!

We do quite a lot of things together as a family, but sometimes it is nice to divide the team. So we decided to take one kid each and plan a long weekend somewhere in Europe. Annika planned the trip to Dublin with Casper.  The adults in the family have been there before, and I remember thinking "we need to come back here sometime when we have kids". So that seemed like a good choice. We found cheap airline tickets and a hotel close to the city on the south side. And we were ready!

CJ was in charge of planning the weekend with Ellen. He usually tries to find interesting places where not many people usually go on vacation. After a little search on the net and a few clicks the flight and hotel were booked to Moscow via Mr Jet. So far so good... Then he began to read a little more and it turned out that they needed a visa to travel to Russia. No problem, how hard can it be to fix a visa....

Well, it was not as easy as he had expected and it was actually quite expensive too (for a short weekend trip). In addition to the Embassy fees (nearly 600 Swedish kronor per person) there was a need for an invitation from a Russian tourist organization. The hotel he booked could arrange it and after a few emails we got a handsome invitation with stamps and only Cyrillic text for another 600 SEK per person. In addition, our insurance company had to send a “Russia” certificate which insured that we had travel insurance. 2 400 kronor and a lot of work (3 physical visits) we finally got our visas. Comparing to travel within EU you can at least see some benefits of being part of the EU.

It was actually much easier to enter Russia than getting the visa. The passport control in Moscow was very fast compared to for example the United States. 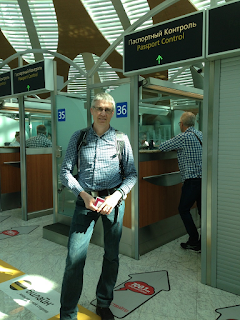 We will return with more detailed descriptions of our city weekends in Moscow and Dublin. This is written the night CJ and Ellen arrived in Moscow when the whole city were preparing for the celebration of the defeat of Nazism 63 years ago on 9th of May 1945. More on that in the next blog post!